"May the Lord watch between you and me, when are absent one from another."
- Genesis 31:39

"If any place will not welcome you and they refuse to hear you, as you leave, shake off the dust that is on your feet as a testimony against them."
- Mark 6:11

Now, to be fair, I have, in my life, only ceased communications with, at most, 5 people in my 4.5 decades on earth. As I can recall:

And now we've come to the fifth person. I accepted a job with this person, and I shouldn't have. I knew I'd made a mistake from day one, but because I was intrigued by the circles I could possibly travel in, I said yes.

Now, there were warning signs that I should have heeded. The first was when the person's debit card was declined at dinner. Twice. And they offered to pay for dinner. The second was when they asked me to do something they could do themselves - make personal grooming appointments. But, because I'd said yes to the job, I agreed.

And the more I worked with this person, the more I realized that I was not the right person for THIS job. I was not the person that they needed. And I told them that, in their language. And, after we agreed what my last day would be, I ceased communication. There was nothing left to say.

Three days later, they sent me a scathing email accusing me of taking money under false pretenses and threatening to sue me. Also in their email, they demanded that I never contact them again.

So I honored their request. I set up filters in my email program so that their correspondence went straight to that folder, I blocked their number on my mobile phone, and have gone on with my life.

They're still emailing me.

I'm convinced that walking away was the smartest thing I could have ever done, because while they may be a nice person, they are not a nice person to work for or with. Once I realized that, this gem of a saying appeared on my Facebook wall: 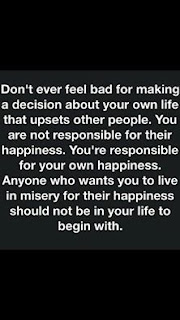 And then this clip showed up on the wall as well: Oprah Winfrey and Iyanla Vanzant. Watch the clip.

"If you argue against reality, you will suffer." Mother Iyanla quoted Byron Katie, and it is SO true.  She also said the following: "How you treat yourself is how you treat God", and "It is SELF FULL to take care of yourself first. You want to come with your cup full." But this is the quote that worked my nerves and shook me to my core:

"When you give to others to the point where you sacrifice yourself, you make the other person a thief, because they're stealing from you and they don't even know it."

I'd made them a thief because I didn't want to say no. I'd made them a thief because I so wanted to be liked. In hindsight,  I'd elevated them and their happiness over my personal happiness (family and ministry). So, walking away was the best thing I could have ever done. They don't deserve to be put in that position because of me. So, I have released them from their duty.

So, yes, I walked away, and turned my back on what could have been a lucrative opportunity. However, my family, friends, and sanity weren't worth it.

Sometimes you just have to walk away.

October 16 is a really emotional day for me. It's the anniversary of my mother's burial and of my father's death. This year, my pastor and mentor lost HIS mentor on the same day. When I wrote this sermon, I had no idea that Larry, the mentor, was going to transition. That adds to my belief that life is not fair, but you cannot give up.

The sermon transcript is below, and the audio can be heard here. I hope it encourages you.

About Church Unusual with Pastor Guy 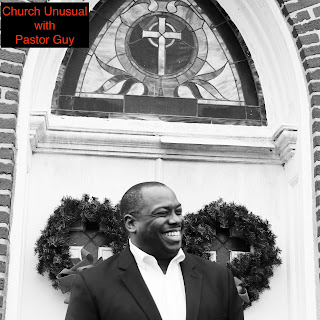 First, welcome to by new blog, Church Unusual! In this space, I hope to provide you with more than just my thoughts, but to help you figure out how you can be the best YOU that YOU can be, all without being overly churchy.

That's a big question, and I will do my best to answer it.

First, I'm a partner to the best elementary school teacher in the world (he truly rocks), the poppy to an adorable, yet stubborn, furby, a brother, an uncle, a nephew, and I think, a really cool friend.

I'm a United Church of Christ Pastor in Western Maryland, currently working on being ordained (that's a blog post for a later time...), and pastoring two small rural churches:


I am a proud graduate of Dominican University and the Lancaster Theological Seminary.


Why are YOU writing a blog? Don't we have enough of those already?

We do have enough blogs already. Give anyone a computer and an internet connection, and they fancy themselves the next big advice columnist. Give them an audience, and they can just broadcast their ideas to the world!

Or...because I spend an inordinate amount of time on social media, generally trying to help others, I figured this could be a space where I can actually expound on ideas, as well as provide podcasts of my sermons for my friends and family members who don't live anywhere near me but want to hear what happened on Sunday morning.

Church Unusual? What does that mean?

Throw away everything you think you know about church, preaching, liturgy, and all of the other things that go into traditional church membership. Forget about suits and hats. That's not what we do in our worship spaces.

So, come back periodically. In this blog will not only be my thoughts, but many weeks, sermons will be here as well, along with a podcast. I hope this blesses you.